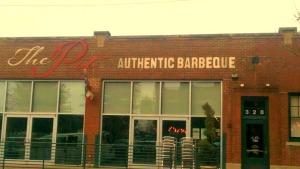 The Pit was an amazing Raleigh, North Carolina experience. I have never been to the pit and what better night to have a first time experience than a cold, Saturday night? The restaurant was P A C K E D and there was a 30-45 minute wait but me and my significant other were determined that we were going to eat sooner than later. The mouth-watering smell that was seeping into the air literally picked us up and carried us through the door. Although the wait time was long, we were offered alternate options such as the bar and what is called “the community table.” The community table was an interesting concept because they were just long tables, that kind of reminded me of like Pilmgrimy, Thanksgiving tables were you just sat down with random strangers and ate dinner. The idea sounds foreign but the community tables were packed and people were talking and laughing like they had known each other for years. I decided that the bar, which currently had two open tables, was going to be our best bet for escaping a half and hour wait time.

After snagging the two open tables, we were immediately greeted by several helpful bartenders who immediately provided us with menus. I began to talk with one of the bartenders, asking was the crowd like this every weekend, and he just answered that it pretty much was but nowhere close to the crowds during special events, and TV show appearances. The idea of one of Raleigh’s very own local restaurants being on TV intrigued me. From what the bartender told me, the Pit has been on everything from the Travel Channel’s “Man vs Food” to “The Today Show” and features in “Good Morning America.” 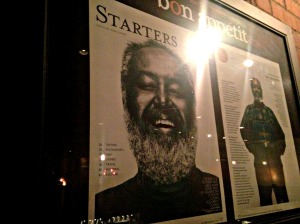 The restaurant overall had a very homey feeling, like a giant BBQ or cookout at a family reunion or something. But the food was inexplicable. You seriously have not had amazing BBQ until you’ve eaten BBQ at the Pit. The ribs fell off the bone, the BBQ made my mouth water, and the sides reminded me of my grandmother’s cooking. It was the epitome of the BBQ that Raleigh and North Carolina is known for. The food is also locally grown, including the pigs, which helps to support North Carolina’s agriculture which is deeply rooted. 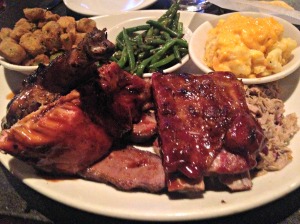 The food was very reasonably priced, unless of course you order a $40 beer like my boyfriend did (haha). Supposedly it was very good and you only needed one. 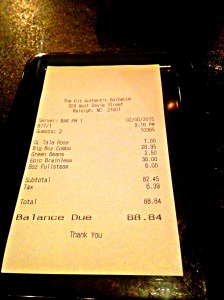 The bar featured all kinds of local beer and liquor, even homemade moonshine “infusions.” 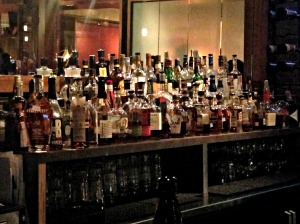 I would recommend this place to anyone who visits Raleigh or is a Raleigh native because its food and hospitality is some of what Raleigh is known for.